There is a almost contradictory way about “christian” metal, a sub-genre for disambiguation sake. I have never been one to get into the extremes of what genre’s have become today, to me it is simply metal, death/black metal, thrash and grindcore. Those are the subtle most reflective genre’s that give you enough point of reference as to what any one particular band sounds like. The sense in putting your religious ideals as part of the genre is one of the most nonsensical things I have ever heard of. If every band was to categorize their bands with religious preference/metal style, it would be a boringly terrible way to find bands.

To me I have no bias in regards to religious, political orientation etc. If it sounds good I will listen to it. I do not believe that Beelzebul is involved in metal music, I do on the other hand believe that there is a certain creative blitz surrounding once taboo topics such as satanism. Nowadays you can call your band “satan worshipping cunts from the clitorus in the womb of filth”, and most metal/nonmetal listening people wouldn’t blink an eye; it has become something of a more satirical/funny. It would be contradictory of me, to not admit my own fascination and involvement in the dark side, I mean just look at my rating system. It is all art and entertaining lore to me. 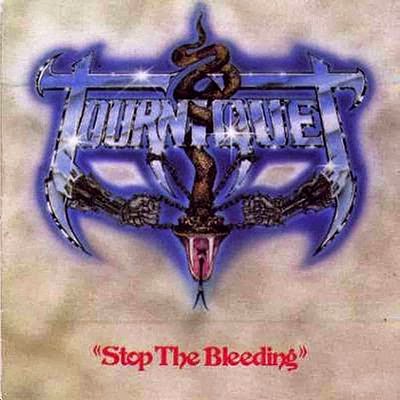 In the case of Tourniquet a speed/thrash metal band, that should be rightfully called one of the founding pioneers of thrash metal. Inspiring they are, they just just didn’t involve themselves in the taboo nature of earlier extreme metal bands, and opted to include lyrical content that is christian inspired. Because of the cut and dry; cookie cutter criteria for creating a metal band, the first on the list would be: “act as evil as possible”. I know some of the tracks on this album can be terribly distracting and almost borderline the “cheese” (reference Stryper) factor. I think they could have easily portrayed a positive image without involving too much their religious beliefs. But then they wouldn’t be true spreaders of the word of god! can I get a glooooray!

With Tourniquet they put out an album musically that is way ahead of its time. Even bands today cannot emulate this sound. Their creativity in vocals are off the wall, standard fare semi-gruff sounding to an insanely high pitched falsetto (somewhat like Mercyful Fate/King Diamond) without warning. Excellent leads, inspired solos, and insanely creative drumming by Kirkpatrick, the bass takes a backseat in the production, with the exception of Harlot Widow and the Virgin Bride, as with most bands. Creatively inspired, and an almost impossible reality this was actually released in 1990.

Highly recommended, I think this and Psycho Surgery are the choice gems from their discography. If you find yourself “too evil” to tolerate the lyrics, than by all means accept your ignorance and remain in a archetypical social degenerate. This is greatly done Metal, and is too good to be slept on.

Before I end this I think it’s worth mentioning the guest vocals of Roger Martinez a now converted satanist. Apparently he got butt hurt a way back and is now scarily evil, and taking himself and life a little too serious. According to credible sources (cough, wikipedia, cough) Roger was credited as co-producer who was clueless in producing albums, but credited only because of his popularity in the christian circles of extreme metal music.

If I wasn’t descriptive enough on the music aspect, I definitely encourage you to check out this album, as I believe it a pivotal piece in the history of metal music.