rambling about a movie (not a review, or anything coherent) 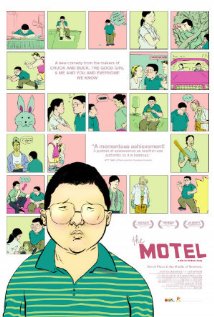 I just watched an independent film called “the Motel” it is about a Asian american family that own and operate a hourly rate motel in what looks like a poor white town. For me the movie is more about the adage of boy (Ernest) becoming man, or the relationship of father and son, and in this case the absent father. I have learned a lot about this topic from reading the fairy tale Iron John, and the psychology behind it from Robert Bly, also the not so great books from christian authors Donald Miller (to own a dragon) and John Eldridge (wild at heart) there seems to be a lot of connection between a boy needing another man to affirm his masculinity.

The movie revolves around a young Asian kid Ernest, who is like many adolescents clueless to life. (kind of sounds like me, and I am an adult ?!) He meets an older guy named Sam who is staying at the motel, you usually see him coming in with hookers and always has a bottle of some kind of alcohol, great role model right? but in this story it is just what the boy needs. He is caught in living life with his guard up and is not anywhere near allowing risk or chance have a role in his life.

It’s rather depressing in the end, but it does show a perplexing view into the male psyche that is just completely unanswerable in this existence. My favorite part of the movie is when they are stopped on the roadside (Ernest and Sam  and they start yelling to the heavens “I want to be happy!!”, “I want to be fucking happy!!” and Sam shares the Buddhist philosophy that life is a process of finding enlightenment. Every trial and every obstacle is the pursuit of becoming closer to that enlightenment. I don’t give a damn about cinematography, and known actors, if a movie can remind me of this core foundation of this existence. All the while inspiring me, it has achieved more for me than I can say for a lot of higher budget movies.

That’s all I got for today. Merry fucking Christmas. I am spending it alone, but I am OK with that. For once in my life, I am happy, and have no reverberating voices that taunt me otherwise.