One thing that is fun for me is searching around for old school death metal bands that appeal to me. Surprisingly, more times than not I find a lot of boring bands. Maybe I am not as true to the genre as I thought I was, but I think all of the standout bands are a standout for a reason, they have a unquestionable ability to appeal to the genre. Well as it turns out I actually discovered an old school band today that actually piqued my interest, and I thought I would give it a go, and try to delve into their sound, and offer a seminal review in the process. Sound good? no, well fuck it I am going to drivel on anyway. 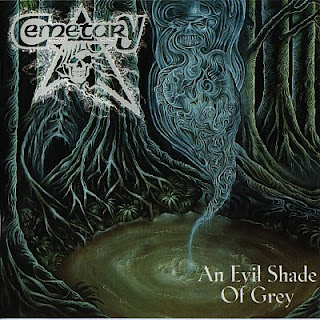 The band I speak of is Cemetery, and the album is “An Evil Shade of Grey”, debuting in the year 1992. It’s rather atmospheric in sound and delivery, it does remain in the ranks of death metal with the down tuned guitars and the guttural vocals. There are some synth sounding arrangements, and they do dive into some softer classical guitar sounding bits. But the crushing patterns interwove between somber and elegant arrangements. It’s a interchangeable sound that I oftenest enjoy, especially in death metal. I have heard this band described as more heavy metal than even death metal. But it to me remains true to death metal, but as said before they do have the ability to change their style from brutality into softer parts.

I cannot believe this band fell through my radar, because they do have a unique sound and are prominently one of few bands from the earlier time period that stands out. Nothing too overly destructive as far as the genre is concerned, this remains an enjoyable piece of music that rely’s heavily on atmosphere, and borrows lightly on the harsh nature of metal music. I cannot say this band is something that I would listen to on a repeatedly basis, but I do consider them something unique, and definitely beautiful. Definitely something to check out considering the time period.

After reading their wiki it turns out this band considers themselves, (swedish) Gothic Metal, maybe something along the lines of Tiamat? I haven’t listened to any of their other albums, to make any kind of judgment. But on this album alone, it is pretty damn good and worth picking up.