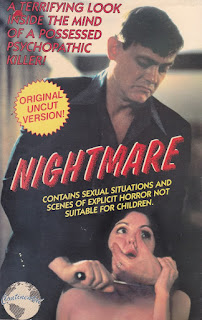 Here we have a slasher gem from the 80’s that runs in the similar vein of Maniac (around the same time period), where we meet a psycho killer who attributed their ill nature from a traumatic childhood, or event. Most namely, in the event of a family member traumatizing the said individual. I find this evident in other movies, but I think Maniac is one of the best examples. 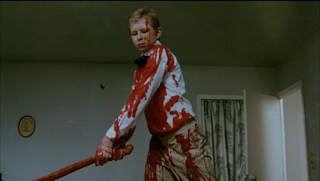 After this we find him escaped from the regulatory maintained requirements of his release from the hospital, and he murders a women and then proceeds to find the house of where his crime was committed in time past. This also proceeds to show the hospital, getting frustrated and demand that they find George before he murders more and all hell brakes loose. I think its funny that the man always smoking a cigar, sounds distinctly like a women. I mean he is obviously a man, you can see by his physical features, particularly the dead ringer of a mustache. Anyway this has nothing to do with, well really anything, but I just found it comical, him sounding a lot like a female. 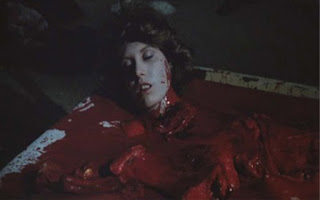 Later on in the movie we are introduced to a family, with a particular trouble maker named CJ, between him and George it really makes up, and surmises the rest of the story. A lot of people will think CJ is a pain in the ass, but if you really think about it, he is just an adolescent out to have some fun and cause mischief. Albeit, some really fucked up practical jokes, but nonetheless he maintains a very independent and strong features about himself, and later you find him truly become the protagonist, or anti-hero if you will, but all the same a credible, and in the end a almost likable character.

I don’t want to dig too much more into the story, without revealing too much and spoiling it for those who have not seen it yet. But all in all, I think this is definitely a credible slasher in the horror genre, namely because of CJ and the quintessential creepiness of George. Not much gore in this movie, and because of CJ it almost takes away from the horror elements and lands it into a almost comedic story. But one thing is for certain it does offer some good gore, especially for the time period. Halloween is right around the corner, and this is good flick to pick up and check out.

For more information check out thegoresplatteredcorner.com, they have a nice review and more images.information about the movie.