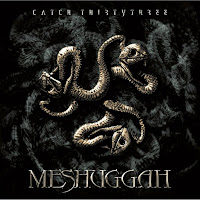 Oh God, save me from this eternal boredom.  Meshuggah is sometimes entertaining and sometimes a drag.  Unfortunately, this horribly disappointing release makes a minute feel like an hour.  It’s the complete opposite of I, and a middle-of-the-road album compositionally.  Not enough experimentation to make it weirder than Nothing; not as chaotic or frantic as Chaosphere, and too self-derivative to be as revolutionary as the classic Destroy Erase Improve.  The tempos plod along, rarely breaking 100 beats per minute, and while the playful rhythm-tricks are there, by now we’ve heard it all before.  Meshuggah appear to be descending into formula: the kiss of artistic death for most bands.  There are some softly spoken vocals, which are the only surprise to come on this album.  All in all, it’s my biggest disappointment of 2005 as of August.  I shudder to bear the thought of struggling through it another time.