– After a relatively quiet January 2004, the year’s first heavyweight release dropped rather quietly onto store shelves.  Hypocrisy, always what I consider a criminally overlooked and underappreciated band, have been soldiering through the death metal underground practically since it began, and should be at near-legendary status – except they don’t seem to get the respect they badly deserve.  Their reputation was likely further damaged by the poorly-received Catch-22, an album largely influenced by American nu-metal band Slipknot.  In a controversial move, Tatgren decided to keep this new album firmly on safe territory, treading absolutely no new sonic ground whatsoever and releasing an album that for all the world could be Abducted Part Two. 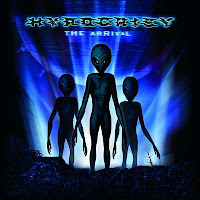 The cover is eye-catchingly gorgeous, done in unified blue hues that represent the concept perfectly.  The three aliens, I presume, represent the trio of band members (drummer Lars has since dropped out of the band and has been replaced by former Immortal powerhouse Horgh) and their new – or, I should say, old – mindset: the alien theme that has made Hypocrisy so unique in the past is back in force.  Lyrically, Hypocrisy has always been about two things: alien cover-up conspiracies, and the (as they perceive) evils of Christianity.  The graphic inverted cross on the disc itself should erase any question as to their stance on organized religion.  The album opens up with an eerie chord progression and some experimental vocal effects reminiscent of Fractured Millennium, before kicking into a high-tempo thrash theme.  This is a rare occurrence, however, and most of The Arrival sticks to the tried-and-true Hypocrisy formula: slow or mid-tempo and crushingly heavy. While the album boasts nothing but solid songwriting, it is also largely repetitive of previous works, particularly songs like Eraser.  Criticism aside, I consider this album to be largely an artistic success, boasting the mid-period Hypocrisy that we know and love while seamlessly blending previous-awkward influences into a cohesive musical unit.  New World and Dead Sky Dawning are sure to be future classics.  Bottom line: heavy Hypocrisy returns with a vengeance.