When I first got into death metal, there were a few considerable memories of some bands, that always had left an impression on me. It might not even necessarily be the band, but a particular album from their discography. I won’t go into too much detail about all of the bands, but off the top of my head is, Prophecy, Broken Hope and Hate Eternal. Now I don’t really see what what was so great about Prophecy, joe ptacek is dead from Broken Hope, which now I realize was the biggest reason I liked the band in the first place, I find that more and more true, with every listen of their new album. And lastly Hate Eternal’s greatest disc, in my opinion, 1999’s, “Conquering The Throne”. I think I am of a small demographic, because it seems like all of their newer stuff gets all the praise. I can appreciate a couple tracks off of some of their newer releases, but nothing like Conquering the Throne, from start to finish this album tears my face off. 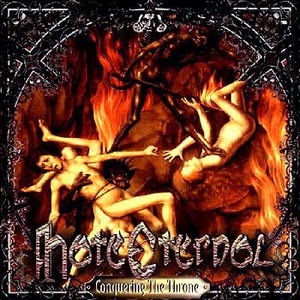 The drumming is incredible, nothing over the top, but with precision and well executed speed. The lyrics and vocals are very decipherable, and are not trying to be overly guttural. The guitars are seriously like a thousand bees buzzing around your head, all retaining a melody that is unique for all tracks. The song titles are some of the most creative I have see put out by a death metal band. Cool cd inlay, the whole package is great. It’s same reminiscent feeling I got from Suffocation’ release “Pierced from Within”, just a memorable album that never gets old.
Like I said I might be of a small demographic here, and to be honest I think that this might be offensive even to the band. But this style was never played in their later releases they journeyed down a new path with their future releases. Which I guess is what makes the album so unique. Because it seems like with “King of all Kings”, they played off of the groundwork on that release, just kept advancing in that style.
It’s undeniable the talent of Erik Rutan, and his contribution to metal music, especially the more extreme stuff like Morbid Angel and Hate Eternal!
Rest in Peace (2006), Jared Andersen…