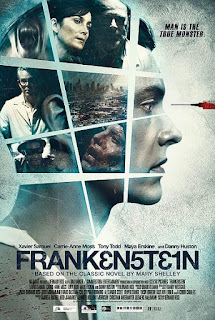 I randomly picked out Frankenstein to watch, my expectations were nil, as if nothing, maybe even burdened by the idea it being bad and having to stop watching it. I happy to say that I started to get into it rather quickly from the beginning. To me when I think of Frankenstein I think of the stereotypical one you see on the Munsters, and is very much identified with Halloween. But this movie managed to display something real, something tangible, many perspectives available to perceive this character.

We run through the experimentation, bringing life to the dead. They bring about life to a corpse, or whatever kind of aesthetic they use, it’s uncertain how about they got the body all together. Unless it was like Andy Warhol’s, Flesh for Frankenstein, where they harbor dead corpses to bring to life. Whatever they have brought to life a man, whose intelligence is that of an infant. He is apparently very strong and although susceptible to pain, he seems to endure a great bit of torture and still manages to carry on.

What I like so much about the movie is that, Adam, he rummages through the real world with a infantile perspective. It isn’t until he meets a homeless man, that he begins to learn and grow more intelligence, this is also where you start to hear him speak like a narrative throughout the movie. He makes a conscious effort to support his relationship with the homeless guy, and if not for an awkward proposal for sex, they might very well have been better off. Through the whole movie, Adam is trying to reacquaint himself with whom he calls mother. He wants love, he is a “monster”, but he does have a strong human desire for love.

Even with his best effort, he is ran off by the townspeople and police. Everyone thinks of him as a worthless disgrace. This is something that I found a great parallel to our own society. We find a majority, a herd, and people will blindly attack anyone they deem a monster. Isn’t this the truth with human beings. We harbor so much hate and disgust with our own species, even if our conception of truth is hearsay. We don’t want truth, we just want somebody to hate. Somebody to lynch and humiliate.