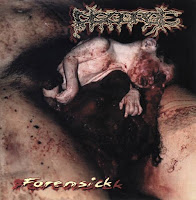 The real deal Disgorge, the singular brutalists from Mexico… churning out the most indistinguishable noise and splatter. The production value is left to nil, maybe a little pocket change and a one attempt to finish the disc. The sound is unlike anything I’ve heard before, I suppose most would lump this in with grindcore, but I think the tracks to have distinction and purpose, not just an ability to produce a noise maker. Disgorge (mex) is definitely not something you would bring to introduce somebody to death metal, this would more than likely humor them and they will go on about how its noise, and you can’t understand what they are saying, its the obligatory speech you get from anyone when you play death metal.

The cover is disgusting with a dead fetus coming from a vagina. I mean these guys really pulled all stops when making this disc. It’s offensive  and repulsive to look at. I think that is exactly the response they were looking for.

Overall this is a pretty unique experience, and really delivers and captures a darkened and sick mood/atmosphere. To the untrained ear, this will be the most monotonous, noisy, pots and pans kind of racket that will make you want to throw the stereo out the window. People will either love it or hate it. I think there is enough here for me to enjoy. Even if the sound does come off as rather monotonous of the same recycled riffs. It has its moments though, and it fucking a great experience. They are definitely the top contenders for the name Disgorge, forget about the guys in California. The band most deserving of the title, is the guys out in Mexico, making sick music for the masses.