Death Metal – the trend, the legacy, the decay 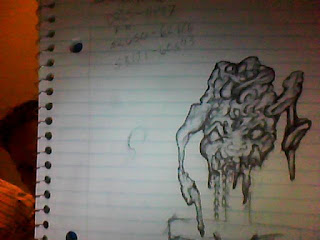 Death metal a offspring of the already subgenre known as Thrash metal, which was popularized by bands like Megadeth, Metallica and Slayer. The earliest bands that I can think of that were probably the main influences of Death Metal were Venom, Sodom and the most obvious DEATH. I am no historian in Metal nor do I care to be, I just want to share my knowledge of the genre the best of my ability, which isn’t worth much, but if you got your wits about you, you will keep reading, ahem… moving right along.

Ok so we have a basic idea of the influences now to mention the bands that really pushed the genre along and that to me would be none other than Cannibal Corpse, Suffocation and Napalm Death. What was the draw to this genre? well it sounded evil and it had really offensive art work, it was individuality and teenage angst more than anything for me. When I was an adolescent I could turn on some Suffocation and feel like the baddest mother fucker alive. Little did I know, that like myself this genre mainly attracted geeks and other anti-social basement dwellers.

Lets move along to the 2000’s and we see a genre of metal that is chugging along rather nicely in it’s small circle fans. But ya know the dark nature of this music attracted lesser developed brains particularly those of a demographic of human that was socially adaptive but found the tried and true formula of death metal a little too complicated so they dumbed it down into brakdowns and “moshy” parts. See as I said before this genre attracted some social folks, one’s that aren’t afraid to adapt with other humans, so they wanted to compromise the genre of music, for more of the live aspect, and less of an enjoyable musical experience. This birthed what we know today as “deathcore”, to me a degenerative aspect of metal music, but its there and it exists, and though a degenerate substandard, I can appreciate certain aspects.

True Death Metal still does live today and is continuing to create noise from the bands of past as well as new one’s that spring up from time to time and garnish some attention from new and long time fans of this genre. Proving that though misunderstood by many has a place in the music world as the almost anti-music movement.