This album had caught me off guard because to be honest aside from Focus, a lot of their newer material hasn’t impressed me much. It has nothing to do with musical ability, or I think they should stay “true” to their roots, nothing like that at all. The shift in vocals, and the musical delivery just comes off as a completely different level of musicianship that doesn’t satiate my fancy. That being said.

I enjoyed Carbon Based Anatomy, a short EP, in which I was hoping to be a sign of the things to come with  their successor Kindly Bent to Free Us. That is sadly no where near the truth, but thats a review for another time, or maybe not at all. 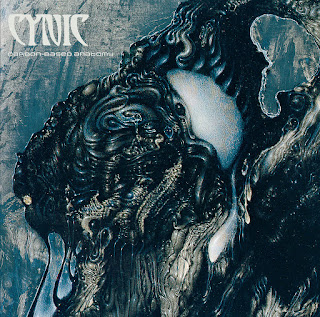 The package is immeasurably comparable to something of Giger status in terms of cover artwork, done by the late Robert Venosa, pretty unbelievable considering I have never been impressed with their other covers, which I believe were all done by Robert.

In terms of music, this album relies heavily on mood and atmosphere to create a sound that is very reminiscent of some older Cynic tracks (cosmos comes to mind), not necessarily musically but in terms of atmospheric delivery. Some of the most beautiful and calming dialogues, quotes come from Buddhists. Aside from the accounts of the life and ministry of Jesus Christ. Religion does hold a viable adaptation to the human experience, mystifying the mind, and maybe even giving a glimmering of hope to the reality of something beyond this earthly existence. I digress.

In terms of vocals they still attained the same style from Traced in Air, that are an acquired taste that doesn’t fulfill my palate. But whether it be ignorant bias or just completely entranced by the avant garde and atmospheric approach this brings without flaw, I found them bearable. The shifts and transitions are from what I understand an eastern earthly soundscape, that shifts into outer space. They never lack in creativity whether you like them or not.

I have listened to this album a couple hundred times (not exaggerating), and I still come back to it every once in a while. I guess what brought me to make this review, was because of this post, priorly posted with nothing but the album cover. It inspired me to write about the album, and my interest in it.

I am a Metal lover through and through, and the most attractive thing about experimentation in Metal is that they can borrow from other genre’s of music but maintain the metal sound. And that is where Cynic has fallen short, their music is so far separated from Metal, and far more into experimentation, it no longer appeals to the metal listener. In the case of Carbon Based Anatomy, genre exploration that has successfully won me over. I just wish I could say the same for their other releases.(after Focus)