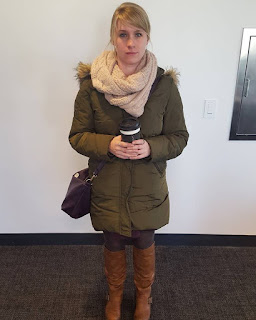 Christen Brandt at 34th Street – Herald Square.
January 28 at 9:52am · New York, NY ·
This is what I was wearing this morning as I made my way through a crowded 34th Street subway station, and a man passing by me said, “Damn, you have some great legs.” When I ignored him and kept walking, he turned around to follow me, to get closer, even as I was moving away. “Did you hear me, honey? I said you have nice legs. Damn! Thank you.”
It was the “thank you” that got me. As if my 5 inches of legging-covered skin were there for him. Given as a gift wrapped in brown tights. Existing in the world for him to appreciate, or not.
Next time you wonder whether your skirt is too short, next time you ask your teen daughter to change her clothes, or the next time you hear about school dress codes in the news, remember this photo.
I am in a fucking parka and boots.
And it. doesn’t. matter.
All women have these moments. All of us. And yet the world acts as if it’s still our problem to fix. Get your shit together, guys.
I, for one, am sick of dealing with it.

This story is so full of shit you can read right through the lies. The only people who will agree with this are impressionable and naive folks. So she decides to make this long post because she got some cat calling by a guy. And then for authenticity sake she takes a picture of herself as if to seal the deal of any doubt about the matter. If you read the story she posted, it’s pretty PG at the beginning but towards the end it gets R rated without notice, she suddenly starts using curse words to tie together a sentence. As if to extenuate because of her female body being visually violated by some passerby. But what really tipped the scale for this prudish broad, was the fact the man was offended because she didn’t say “thank you”.

But what this article is really about, has nothing to do with the women pictured or even the story, is that it’s about women being able to dress however they like, without any repercussion, because this woman has obviously proven that she is dressing in plenty enough clothes to not be sexually harassed by the terrible male populous.  There is absolutely no way of confirming whether or not this story is true or false, and really to make it unequivocal and apparent to the matter, it makes no difference.  This entire article is trying to persuade the reader into believing yet again, than men are in the wrong and women are in the right.

It’s ok ladies you can dress like sluts, because men are going to harass you either way. I mean I wore this winter attire and got cat called out.

I think the entire story is bull shit. It sounds slanted and very dishonest.