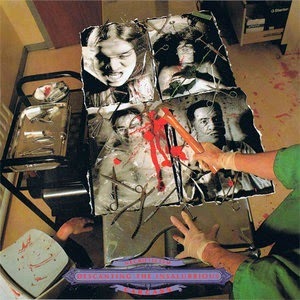 My history with the band Carcass is a bit jaded, of course they had some memorable tracks that were great to listen to. But I didn’t necessarily jump on the bandwagon, I was a fan by association. I mean who can call themselves a fan of Death Metal and not like the mighty Carcass. Let me make it perfectly clear right off the bat, I am not interested in their older predecessors, and with the exception of Heartwork their successors either. I like what I like, it is all about personal preference. There are more than a handful of credible bands that I can only handpick a select few releases that I actually like from them. That is the nature of music, the evolution and transformation in sound. It is not bad, it is absolutely necessary for any form of media/entertainment to advance, they are artists, and they portray their art accordingly. Whether it is progress or regress, is entirely up to the listener.

Their earliest work as described is known as Grindcore. A genre I can only describe as violent bursts of noise. The typical band will belt out a indecipherable barrage of noise in under a minute and have a tracklist well into the double digits, god forbid the triple digits. It’s definitely a novelty genre, but it does have some credibility with bands like of course Carcass(derr), Napalm Death, Brutal Truth, Cephalic Carnage and Anal Cunt who have or been described as Grindcore. I guess the best example of this is none other than Carcass who transformed into a progressive and technical Death Metal powerhouse. The lead work by Amott and Steer are some of the most progressive and borderline genres, not to mention technical prowess for a death metal band. The harmonies the solos all interwoven to create a jaw dropping masterpiece. For whatever reason, beyond Heartwork I got disinterested with the band, I cannot say for sure why or for what reason, the newer work just does nothing for me.

To me the most pivotal and prolific album from this band’s discography is Necroticism. It borrows the atmosphere and lyrical approach of their earlier work, but goes bounds and leaps in the musical department. This well maintained the balance between chaos and the ability to play some sweet melodies that could easily be a forerunner for the development of not only extreme music, but the metal and rock world. The leads and solos are what do it for me without a doubt. It’s also entertaining and never old to hear the interludes, which some are almost satirical in tone and nature. Makes me think of some old b-horror movie. Some of my favorite quotes on this album can be found featured on the Incredibly Strange Film Show. To me the dialogue between tracks and the technical prowess of Steer and Amott as described earlier just blend together a perfect a perfect release in my opinion. And the key title in their discography.